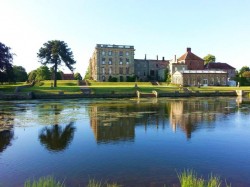 More in this area

Page Visits For This Attraction

690 acres of fun for kids, ideal for school trips

The Abbey was founded by the Cistercians in 1154, but very little trace remains of the original Abbey buildings except for the 14th-century Gatehouse.

After the Dissolution of the Monasteries the estate was acquired by Sir Thomas Leigh, Lord Mayor of London in 1558, and a house was built on the site of the monastic buildings. It was the home of the Leigh family from 1561 to 1990.

Between 1714 and 1726 a new palatial four-storey fifteen-bay west wing was built to designs by architect Francis Smith of Warwick and provides an impressive range of state apartments.

The Historic house can now only be viewed by guided tour which run everyday.

However you can now get a glimpse of the house history in the new Vaulted hall Cafe, formally the house staff dining and rst room. With over 900 years of history locked within the very walls of the main house there is so much to learn and discover, so dont miss out on a guided tour if you are visiting us.

If you are looking for an educational day out, then Stoneleigh Abbey should be top of your to do list. We have 690 acres of grounds with the River Avon running parallel to the house, including a beautiful woodland area perfect for children to explore and learn about the different trees, bugs and animals who live here.

See over 100 independent reviews on attraction

See over 100 independent reviews on attraction

Fill in your address into the address field below the map and the shortest route will be calculated.